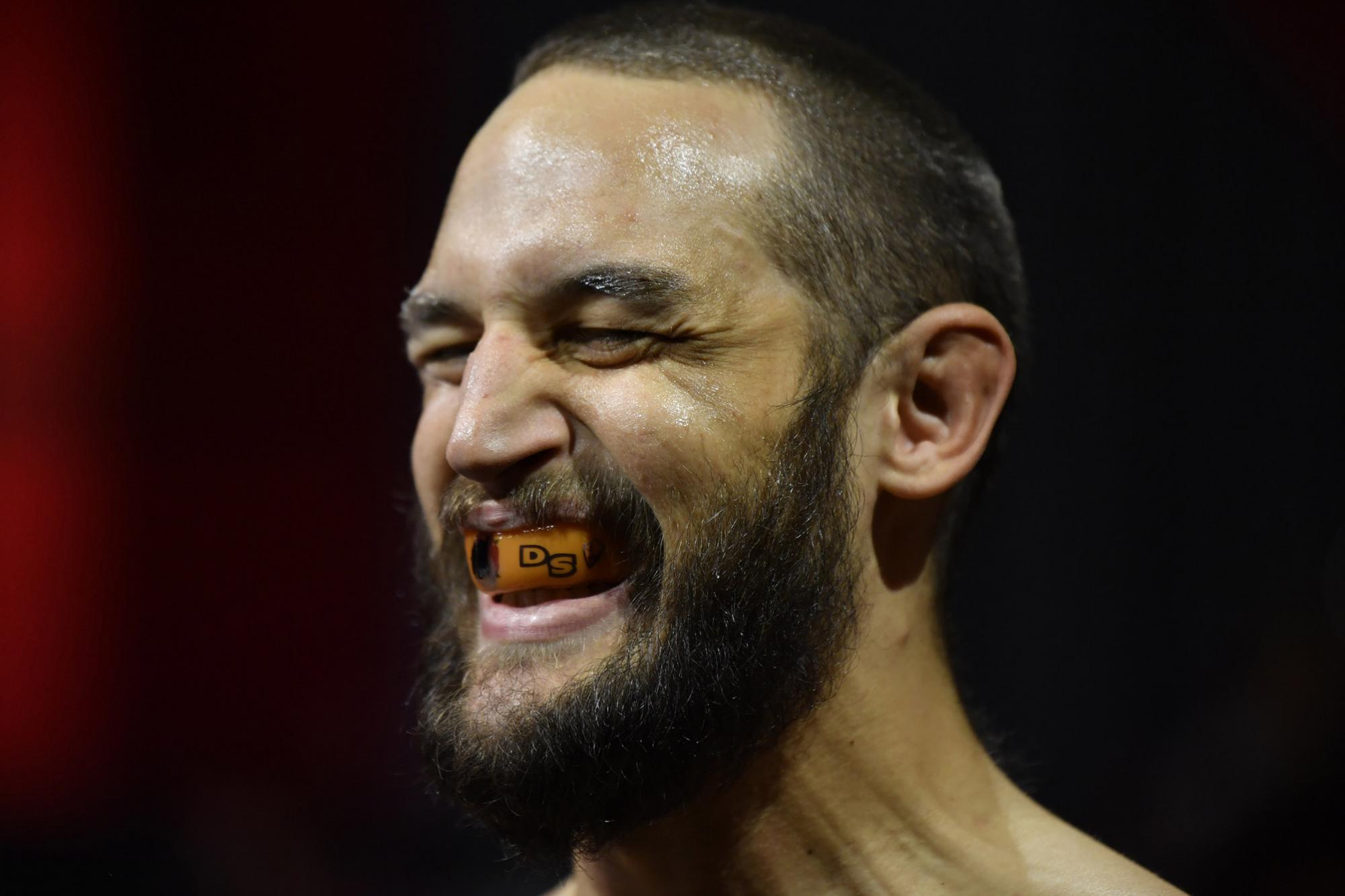 With COVID Woes Behind Him, DWCS Grad Looks To Being Making Waves At Middleweight
By E. Spencer Kyte, on Twitter @SpencerKyte • Jul. 15, 2021

After earning a UFC contract last summer on Dana White’s Contender Series, people throughout the German MMA community and the area where Dustin Stoltzfus lives started referring to the middleweight prospect as a “UFC fighter,” a moniker the Pennsylvania-born fighter wasn’t quite comfortable wearing.

“You hear it a lot — ‘Dustin is in the UFC’ — and I’m starting to get introduced as a ‘UFC fighter,’ which is a little bit premature because I still need to have my first fight in the UFC,” the 29-year-old told me in the build-up to his promotional debut against Kyle Daukaus towards the end of November at UFC 255.

Eight months later, with his first foray into the Octagon out of the way and a sophomore assignment against grappling legend Rodolfo Vieira on tap for this weekend’s main card, Stoltzfus still isn’t ready to accept being referred to as a UFC fighter.

“I’m definitely more on the “let me get that first win and then I’ll accept that mantle” page,” the returning middleweight explained in advance of his bout with Vieira. “I can’t put into words how disappointing that last fight was for me. 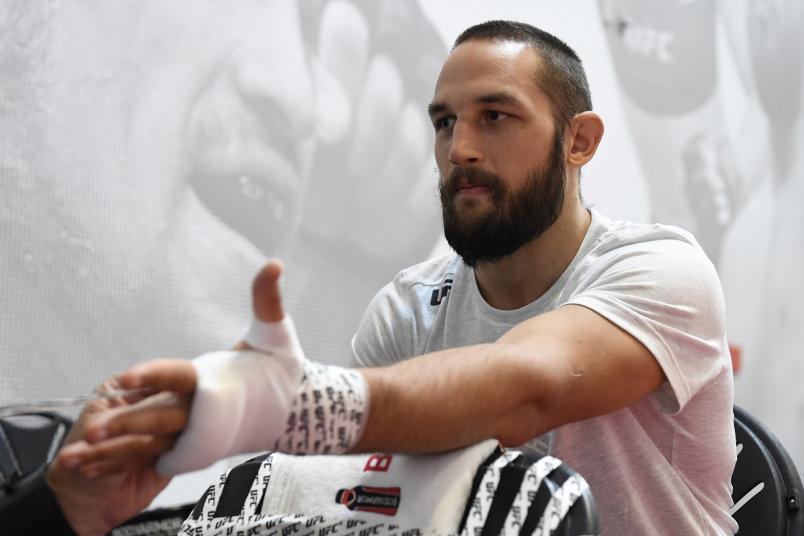 Dustin Stoltzfus has his hands wrapped backstage during the UFC 255 event at UFC APEX on November 21, 2020 in Las Vegas, Nevada. (Photo by Mike Roach/Zuffa LLC)

“Losing is losing — it happens — but to lose in that sort of way and not even be able to show what you can do really, really upset me.”

Earlier in the fall, Stoltzfus tested positive for COVID-19, but after he was cleared to return and compete, he continued feeling fatigued. Chalking it up to being tired from training and having gone a round with the coronavirus, the newcomer persisted, steeling himself to battle through the malaise and allow his skills and grit to carry him in the bout with Daukaus.

Stoltzfus was exhausted a minute into the contest, and while he lasted until the final horn, it was one-way traffic for the entire 15-minute affair.

“It wasn’t that I was sick, per se, it’s that my body didn’t have what it needed in order to be the proper energy transfer for something as labor-intensive as a fight,” the analytical and articulate hopeful offered. “So yeah, it was a bit of a rough start.”

Several months later, he was still dealing with lingering issues, prompting multiple trips to the doctors and a number of months doing modified workouts and only light training after being instructed not to push things too hard before everyone knew for sure what was going on with his body.

“It took months and months and months to find out what was going on, and then it was right around the end of March, beginning of April that I found out it was a micronutrient deficiency,” explained Stoltzfus. “I started taking the appropriate supplements and within a week-and-a-half, I felt fine.

“The COVID knocked out my immune system, which opened the door for a whole bunch of other things like an intestinal tract infection and things like that, which really took out a whole bunch of things. I was taking a fistful of pills every day, but it got me straightened out really quickly.” 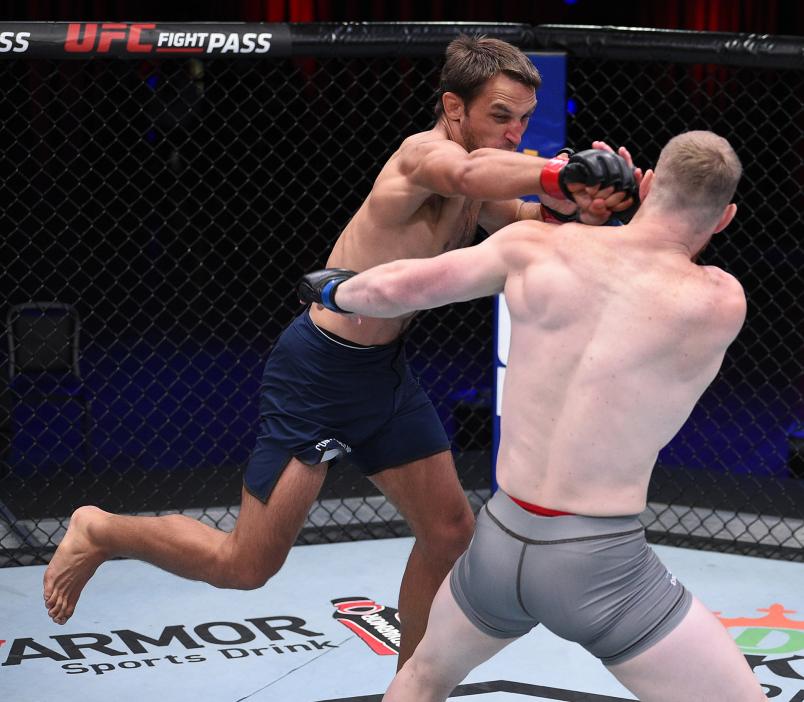 The extended time off turned into a bit of an unexpected blessing for Stoltzfus, as he used the prolonged absence as an opportunity to work on his deficiencies and expand the number of coaches and training partners he works with in advance of his fights.

In addition to making his usual excursion to train at retired UFC veteran Peter Sobotta’s gym, Planet Eater, in Balingen, the UFC sophomore also opened up his own small training facility where he lives in the Rhineland-Palatinate district of Gemersheim. But with the country still in a strict lockdown just a few weeks prior to the fight, the admittedly frugal fighter opted to make the trek to Las Vegas early in order to get settled and have a less stressful final week of training before rolling into Fight Week.

“I’m a bit cheap, so I really don’t like spending money, so it’s always hard for me to come earlier,” he said with a laugh before explaining the detailed scheduling and increased headaches organizing a training camp in a lockdown entailed. “I was getting really frustrated with that and thought, ‘It’s worth it. I’ll go in a week earlier because I know I have good training partners over here, and the PI is here to use, so that last week of training, I’ll be able to do my thing and not have to have that one extra stress.’”

And fewer stresses are always a good thing, especially when you’re looking to rebound from a disappointing debut.

“I’m not sure which one of us they’re trying to give a loss to,” joked the thoughtful Contender Series graduate. “A part of me is like, ‘Are they just trying to get rid of me?’ because Rodolfo is an incredible name or were they so unimpressed with his last fight that they thought, ‘Dustin can handle this.’”

“Maybe I’m thinking about it too much.”

After seeing Nelly Gonzalez waiting in the Las Vegas summer heat, @DanaWhite had to help her meet @TeamKhabib.

Prior to his last outing, Vieira was undefeated, having earned seven consecutive victories, all by stoppage, since transitioning to mixed martial arts after ending his competitive jiu jitsu career as one of the most decorated grapplers on the planet.

He won each of his first two UFC outings by submission and went hunting for another early finish against Anthony Hernandez in February at UFC 258, but when he couldn’t lock up a submission and get “Fluffy” out of there, his gas tank quickly ran dry and he was dead in the water.

Less than two minutes into the second round, Hernandez secured one of the biggest upsets of the year, clamping onto a guillotine choke and forcing the black belt to tap.

“I don’t think there is another name, another opponent in the UFC right now given the position I’m in that would excite me more,” Stoltzfus said of his pairing with Vieira. “He’s a big name, he’s really good at what he does, but lined up with my skill set, he’s very beatable.

“It’s not like I’m going in against someone where I feel I have no business losing to this guy — he’s a beast, and if he catches your neck, you’re done — but also, the holes in his game, the deficiencies in his game, line up really well with what I can do, so it excites me a lot.

“His body is so accustomed to grappling fights and you can really see that — he has amazing power and amazing endurance for the length of a grappling fight, but then after that, not really so much anymore,” he added, assessing Vieira’s game and charting his path to victory. “So it’ll be about putting a pace on him and putting a lot of work on him in the first while.

“I just need to not let him get comfortable in what he’s doing and try to catch him later on with either a choke or on the feet.”

If things work out as he’s forecasted, Stoltzfus may finally be comfortable being identified as a UFC fighter, but don’t expect him to revel in the moment for too long; that’s just not how he’s wired.

“I’ll celebrate for a couple days, but as soon as I get back to Germany, I’ll be back on the mats, getting ready for the next one,” he said. “I’m a workhorse — I need a goal and a purpose ahead of me, so I won’t be sitting around thinking, ‘That was nice.’