Nick Diaz is one of a kind.

To paraphrase from Lisa Simpson’s analysis of Nelson Muntz, Diaz is like riddle, wrapped in an enigma, twirling nunchucks with his shirt off, sending hardcore fans into a tizzy every time there are even whispers that he might be readying to make a return to the Octagon.

The only fighter who generates the same kind of unwavering loyalty and constant praise from their committed followers is his younger brother Nathan.

Order UFC 266 To See Diaz's Return To The Octagon

People adore Diaz because he popularizes phrases like “wolf tickets” while vacillating between being dynamic and dominant inside the cage and delivering quixotic performances that no one else could possibly match.

As the UFC continues to celebrate Hispanic Heritage Month, here’s a look back some of the standout UFC performances in the career of Nick Diaz.

This was a showdown of two of the welterweight division’s brightest up-and-coming talents, with Diaz, 20, entering on a three-fight winning streak, having won his UFC debut seven months earlier, and Lawler, 22, standing as the future star of the Miletich Fighting Systems camp.

Lawler’s lone loss to that point was due to a hip injury and he was revered for his ability to take a punch. Diaz, on the other hand, sported an 8-2 record, and was viewed as a jiu-jitsu specialist. While he’d earned three finishes due to strikes, those victories were earned with volume, not single-shot power.

Diaz came out of the gate with a hopping side kick, then started taunting Lawler, gesticulating in a manner that would become his trademark, but was brand new at the time. Diaz caught him with a clubbing right hand less than a minute in that caused Lawler to lose balance and momentarily have a knee on the canvas, which drew a smile from Lawler and sent him on the offensive.

Check-Out Every Fight On UFC 266

Diaz weathered the flurry and eventually resumed walking down Lawler, taunting him further, talking to him, and hitting him with an open-hand slap we today know as “The Stockton Slap,” putting the 22-year-old rising star on wobbly legs two minutes into the opening round. After a brief clinch, they resumed trading blows, each man landing, each man responding in kind, neither showing any signs of backing down through the opening five minutes.

Diaz pressed forward to start the second, but Lawler landed the first good shot, backing the 20-year-old up momentarily. As soon as he reset, Diaz was back applying pressure, sticking a long jab in Lawler’s face and attacking with low kicks. They worked their way to the center of the cage, pawing at each other, trading occasional connections when Diaz offered a quick counter right hand that landed flush.

Lawler straightened up as soon as it connected, then did a face plant in the middle of the cage, prompting the referee to immediately step in and stop the fight.

The jiu-jitsu specialist had knocked out the knockout artist, and more importantly, Nick Diaz established the template for what a classic Nick Diaz performance would look like in the future.

The welterweight combatants had jawed with one another throughout the week, creating added tension between the two, and then on fight night, Riggs emerged victorious, kicking off the pay-per-view main card with a unanimous decision win, rallying from a tough first round and a pair of broken hands to batter Diaz over the final 10 minutes.

Diaz was unhappy with the decision and both men were transported to the hospital, where the fight continued.

Yes, you read that correctly ­— the fight resumed at the hospital.

Diaz started talking junk to Riggs, who was strapped to a gurney and covered in Diaz’s blood. Riggs walked past Diaz’s room, the two started jawing back-and-forth, and Diaz got up and blasted Riggs with a punch that sent his tooth flying, kicking off Round 4….in the hospital.

This remains one of the wildest stories in UFC history and is the subject of a terrific episode of Fightlore that you should definitely check out.

While some might question how a unanimous decision loss can be considered one of Diaz’s top performances, it’s the totality of things with Riggs that makes this a signature Diaz moment — the animosity between the two, the frustrating loss, the continued trash talk, and the wildness that ensued after the fact are all part of the Nick Diaz experience and contributed to his emergence as the sport’s reluctant, enigmatic superstar. 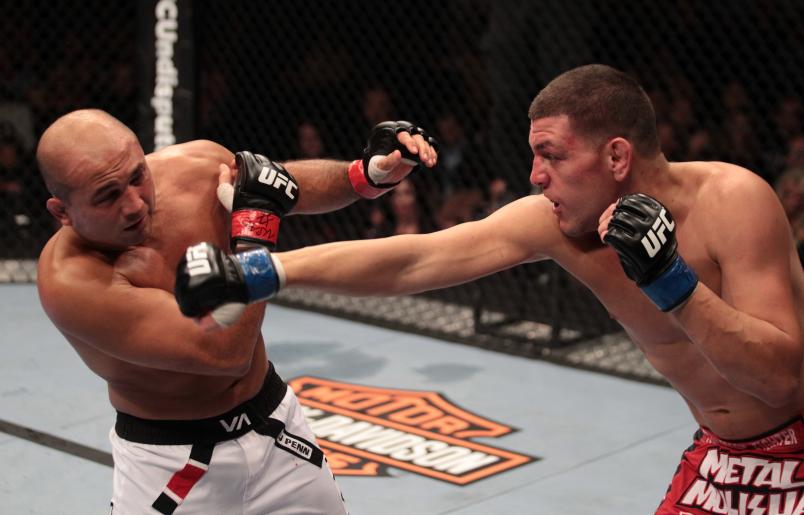 Nearly five years after his last appearance in the Octagon and emerging as one of the best fighters on the planet, Diaz returned to the UFC, landing opposite Penn after a series of changes to the UFC 137 main event.

Penn had returned to the welterweight division a year earlier, registering a first-round knockout win over Matt Hughes before battling Jon Fitch to a majority draw at UFC 127. “The Prodigy” still looked like a formidable test for the standout from Stockton, who had gone 11-1 with one no contest in his 13 fights between UFC appearances, and while it wasn’t the main event matchup fight fans were originally expecting, it became a classic Diaz performance nonetheless.

Check It Out: Every Performance And Fight Of The Night Bonus From 2021 So Far

This was Diaz at his absolute best, showing outstanding defense on the ground when Penn had him on the canvas early before using his fluid boxing and bottomless gas tank to drown Penn in pressure and punches over the final 10 minutes on the way to scoring a unanimous decision victory. The duo won Fight of the Night honors and the win once again put Diaz in position to challenge for the welterweight title.

What makes this fight really stand out for me is that it was largely free of the usual Diaz flourishes; it was just a tremendous showing from a fighter at the top of his game. Sure, he yapped and mugged a little, but for the most part, he just fought, and he looked outstanding against a UFC legend.

Initially slated to be a clash between Diaz and reigning welterweight champ Georges St-Pierre, an injury to “Rush” opened the door for Carlos Condit to step up and face Diaz for the interim welterweight title.

To this day, this remains one of the Top 5 most disputed verdicts in UFC history.

The judges were unanimous in their decision, awarding Condit the fight with scores of 48-47, 49-46, and 49-46, but Diaz loyalists remain steadfast in their belief that the standout from Stockton won three rounds and deserved to walk away with the interim welterweight title around his waist.

Regardless of how you score the fight watching it back at home, this bout, perhaps more than any other in his career, showed how tough and talented Diaz is and what he brought to the table every time he stepped into the Octagon. He and Condit battled for every inch, both sticking to their respective game plans and delivering signature efforts in their storied careers, with Diaz trying to march down Condit like a damn Terminator for 25 minutes.

Condit won the fight, but Diaz once again showed that he was among the best welterweights on the planet and one of the most consistently entertaining fighters in the sport. 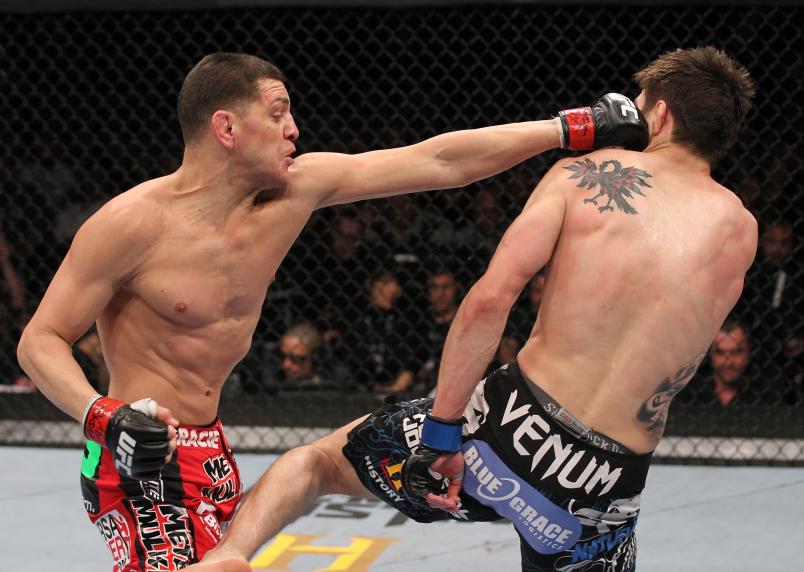 Diaz hadn’t fought since suffering a unanimous decision loss to Georges St-Pierre at UFC 158, while Silva was competing for the first time since breaking his leg in his second bout against Chris Weidman at UFC 168 a little more than a year earlier. They were two of the most popular fighters in the game, two of the most complete competitors to grace the Octagon during their time, and this was a dream matchup come to life.

If the fights with Penn and Condit showcased Diaz at his fighting best, this was the most iconic, enigmatic showing of the veteran’s UFC career.

Diaz rushed out to the center of the cage and started jawing at Silva and gesticulating at the former middleweight champion almost immediately, calling him in and dropping his hands. A minute into the opening round, Diaz laid down on the canvas, striking a pose that lives on as a meme to this day.

Seconds later, he backed himself to the fence and called Silva forward, aping a move “The Spider” had used himself multiple times in the past against opponents he believed were overmatched. When he returned to the center of the cage, he stood catatonic for a beat, turning his back to Silva, drawing another directive from referee John McCarthy to engage.

Silva would pick his spots and pick his shots, ultimately winning a unanimous decision on the scorecards in a fight that is memorable for the antics of the losing fighter more than anything else.

Diaz hasn’t fought since, but every time there is a hint of a possibility that the now 37-year-old veteran might be ready to step into the Octagon once again, social media becomes alight with excitement and fantasy matchmakers rush into action, trying to figure out the ideal matchup for the mercurial cult figure who has crafted one of the most memorable careers in UFC history.

Dana White Has a Plan for UFC World Domination |…

The UFC Has Grown Explosively Under Dana White. Now As Endeavor's Crown Jewel, Its Ambition Is To Be The World's Most Popular Sport.

The UFC's Return To Abu Dhabi Will Be An Epic Affair, Featuring The Light Heavyweight Championship And A Huge Slate Of Can't-Miss Bouts

Ahead Of Their Epic Rematch November 6 In The Co-Main Event Of UFC 286, Let's Look Back At The First Meeting Between Champion Rose Namajunas and Zhang Weili