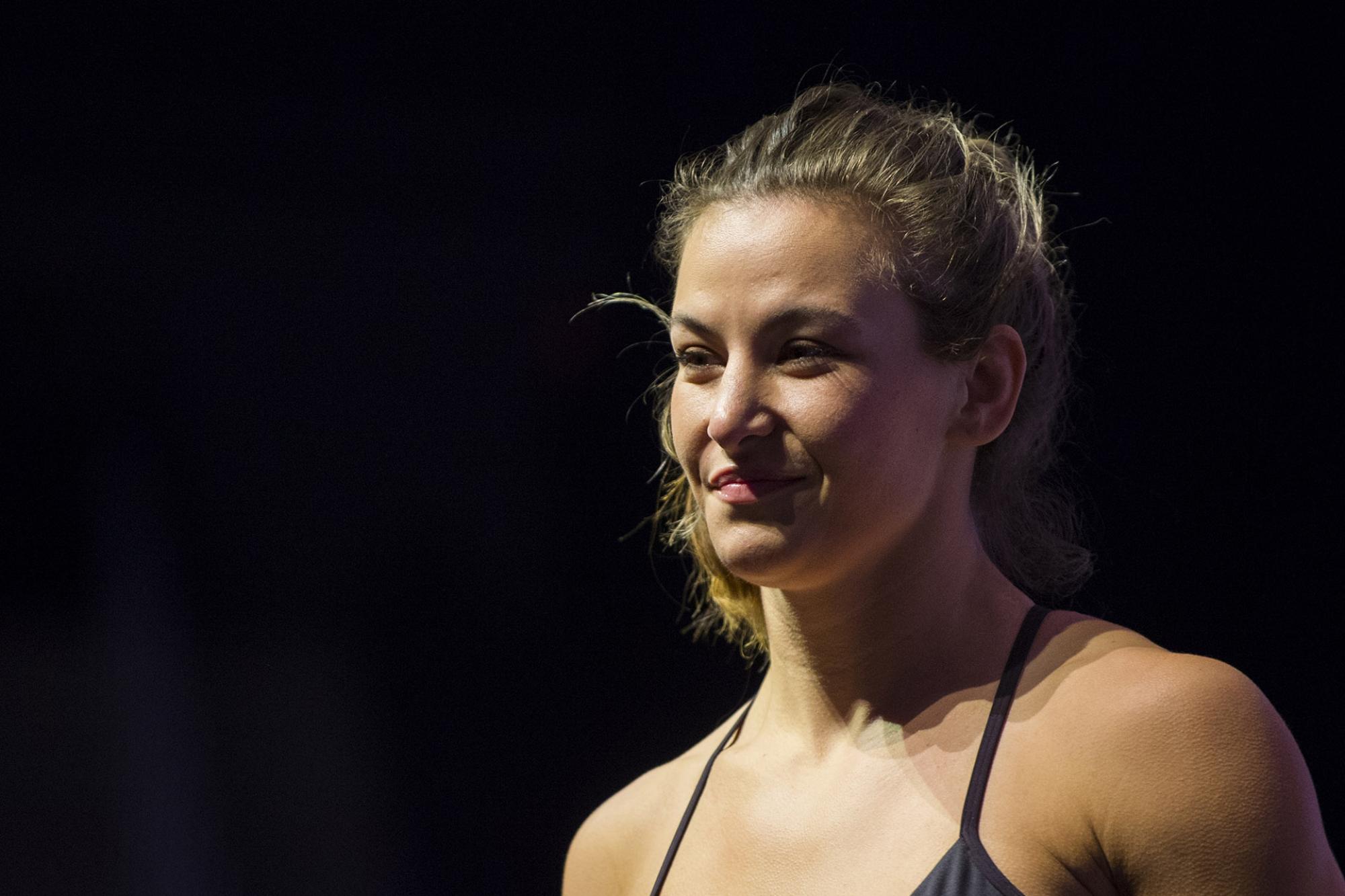 "Cupcake" Talks Retirement, Un-Retirement And What It Means To Be Mom Champ
By Thomas Gerbasi, on Twitter: @TGerbasi • Jul. 15, 2021

Most retirements in combat sports are either unexpected, too late, or short-lived. Miesha Tate’s decision to walk away from mixed martial arts after a November 2016 loss to Raquel Pennington was most definitely one for the unexpected column.

The Tacoma native was only 30 years old, just five months earlier she was the UFC women’s bantamweight champion, and while she lost to Pennington, it wasn’t like she was blown out of the Octagon by “Rocky.” So most believed that six months later, she would be announcing a comeback.

It didn’t happen and she didn’t expect it to.

“Nope, not at all,” said Tate. “I had no hesitation about the retirement and sticking to it. I absolutely meant it.”

Of course, there’s no shame in a fighter leaving on their own terms with some gas left in the tank and some paydays remaining on the table. But it does bring up a lot of questions, ones that Tate had the answers for, then and now.

After five years away from the Octagon, @MieshaTate makes her long-awaited return at #UFCVegas31 🔉⬆️ pic.twitter.com/fqSl7klKnC

“Looking back, I realized I needed to separate myself from some things in my life, but those were very entangled with fighting,” she said. “So it wasn't so much the fighting; it was just my life and how it was all entangled together that I just had to remove myself entirely from the knot, so to speak. And then, as I removed myself from that situation, I cut ties with unhealthy situations, and I really took the time to grow and learn about myself as a person.”

It was then that the questions weren’t coming from fans, media and her inner circle, but from herself. Getting those answers may have taken a little longer, but she got them.

“When I took that step away from the sport, I took the time to soul search, and I took the time to ask myself the hard questions. I was struggling with depression at the time, I was really in a dark place, and I knew that the trajectory of where I was headed in my personal life was not good. And I needed to make some changes just to be happy. I didn't know exactly how to do it; I just knew what wasn't working so I took a step back from everything and I just really tried to find myself.”

She did, and while Tate knew she would always be a fighter at heart, there was a world out there waiting for her, and she wanted to experience it. And unlike so many fighters who go through failed retirements, life away from the competition side did Tate good.

In June 2018, Tate and her fiancé Johnny Nunez welcomed their daughter Amaia into the world, and their son Daxton followed in June 2020. And from a professional point of view, Tate got into fighter management, was a co-host on a popular SiriusXM podcast, and was a Vice President for the One FC promotion in Singapore. In other words, Tate didn’t need fighting anymore, until she did, something she discovered just before giving birth to Daxton last year. 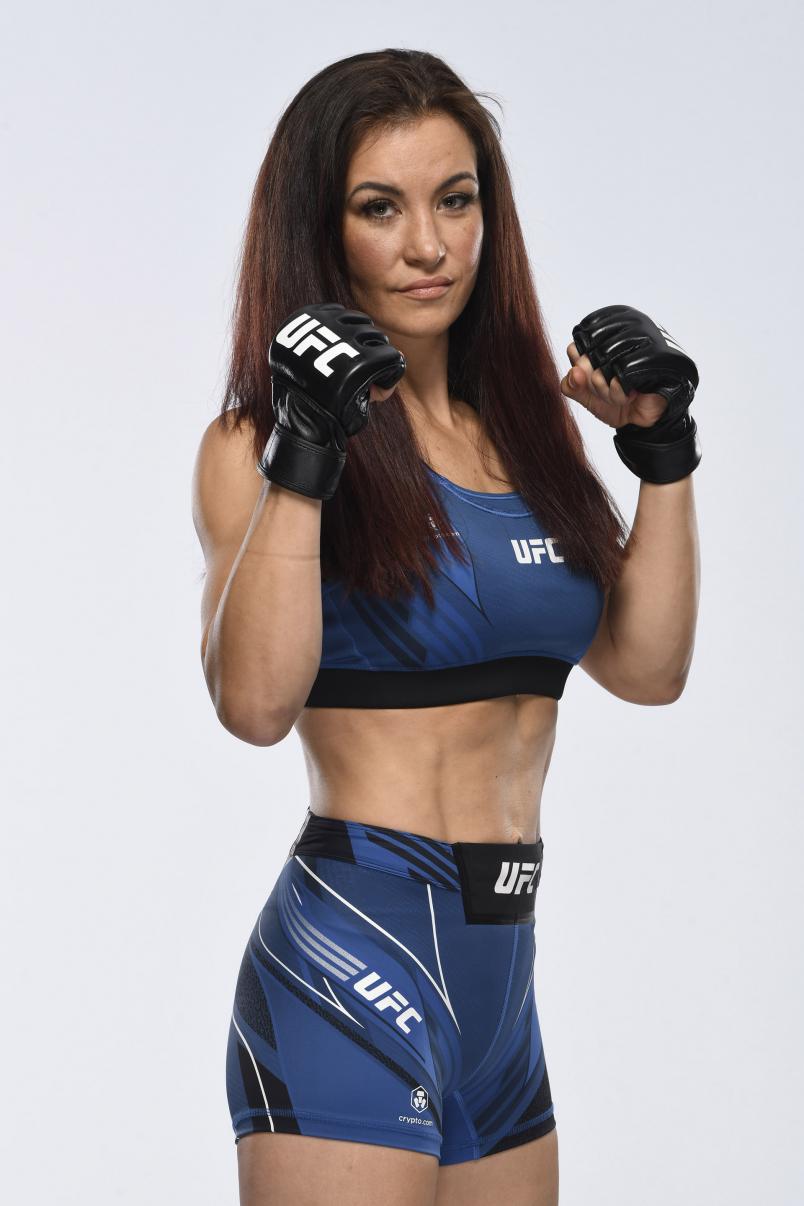 “I first got the inkling when I was nine months pregnant,” Tate said. “I started thinking about fighting again and I thought, ‘That makes no sense. Why now?’ But to be honest, it's that good ol' saying that absence makes the heart grow fonder. I was in Singapore at that time, and everything was locked down. I had no form of training. It was really all taken away from me and it wasn't until it was all gone completely, without even any fights to watch, that I really started to identify with how much I actually missed it.”

Fighters On The Rise | UFC Fight Night: Makhachev vs. Moises

“I thought, 'That's crazy, I'm sure it's just my hormones evening out.'”

It wasn’t, and after Daxton was born, Tate started to give serious thought to getting into a training camp and fighting again. That’s not as simple as it sounds, even for a former world champion, and Tate knew she had a long road ahead of her. But taking on a long road starts with one step. 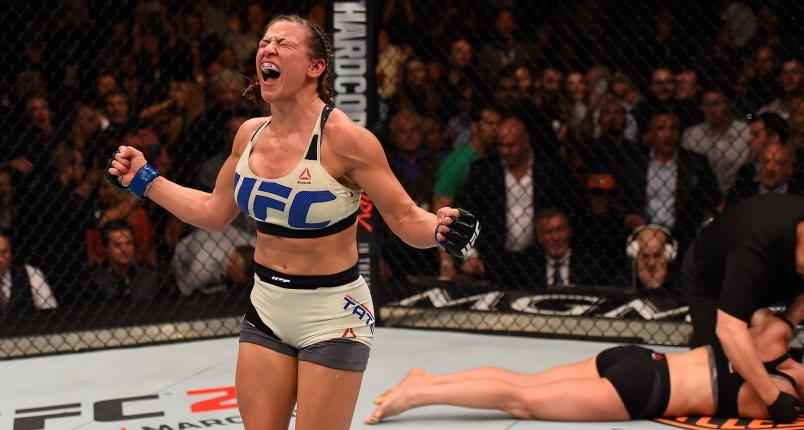 Tate reacts after her submission victory over Holly Holm in their UFC women's bantamweight championship bout during the UFC 196 event inside MGM Grand Garden Arena on March 5, 2016 in Las Vegas, Nevada. (Photo by Josh Hedges/Zuffa LLC)

“After I had my baby, I could not wait to walk on the treadmill,” she said. “I just wanted to walk on a treadmill so I could start my journey back to fighting. That's where it started - literally one step at a time. I couldn't run, I couldn't grapple, I couldn't do any of that stuff. I'm post-partum recovering but I could walk, and that's what I did. I put one foot in front of the other until I was running, until I was grappling, until I was doing it all.”

Soon, it all came back to Tate, and it was time to let the world know that she was back. In March, she made it official, with the announcement of her Saturday co-main event against Marion Reneau following soon after. Now all that was left was to get ready for a prizefight while being a mom to two little ones. Again, not as easy as it sounds. Then again, that doesn’t sound easy in the best of circumstances.

“It takes a village,” the 34-year-old Tate laughs when asked how she manages this juggling act of all juggling acts. “I wouldn't be able to do it by myself, I'll tell you that much. If I didn't have the amazing support system that I have, it would be absolutely impossible. It's still tough right now because being a mom, you can never fully leave that job, and I don't want to. I like being hands on with my children, but they're three and one, so they still need a lot; they're not very independent yet. So I'm finding the balance in it all. There is no pamphlet or instruction manual on how to do this the best way, but I've leaned a lot on my mom, I've leaned a lot on my fiance, I've leaned a lot on my friends, who have all been more than willing to step up in the times that I say I need help. Fortunately, everybody around me this time genuinely wants to see my success and I'm just leaning on help. It's all a balancing act, but I think I found a great way of dealing with it all so far and I'm getting the best of both worlds and I feel like a Mom Champ.” 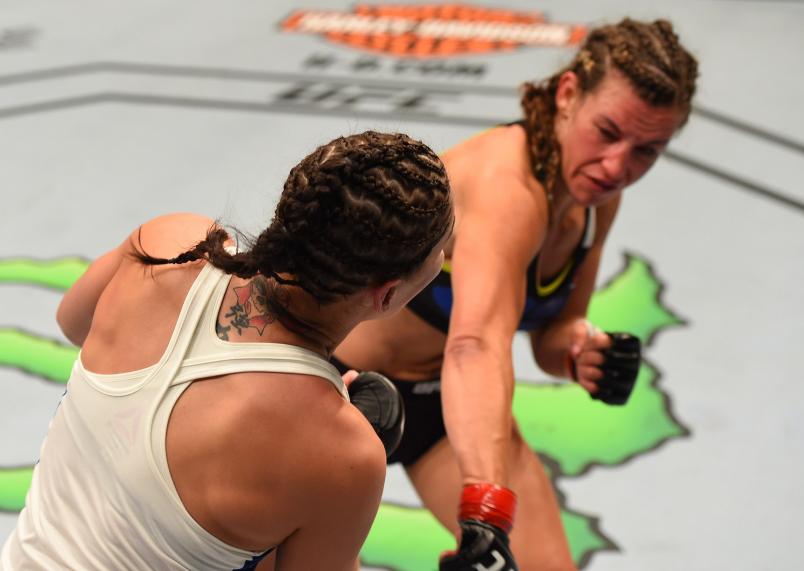 Miesha Tate drops Jessica Eye with a punch in their women's bantamweight bout during the UFC event at the United Center on July 25, 2015 in Chicago, Illinois. (Photo by Jeff Bottari/Zuffa LLC)

Tate says the words Mom Champ with pride and she’s earned that title, belt or no belt. But while she has already cemented her legacy as a pioneer of women’s MMA who helped put the sport on the map while winning UFC and Strikeforce titles, Tate isn’t back on a lark to get another fight and then walk away again. There is a goal here, and it has everything to do with wearing championship gold again.

“I'm not coming back to play games; it's not a sport you play around with,” she said. “I'm coming back to be the very best, and I'm training at all times to be and to beat the very best, regardless of who is standing in front of me. Nobody will get underestimated, and there will always be gold in the back of my mind. Every person that I fight will be the world champion in my eyes, and I will take them out one at a time until I'm the world champion with the target on my back.”

It’s an ambitious plan, but do you want to doubt her? She’s certainly not doubting herself.

“The timing is perfect because I'm still young enough to be able to utilize my body in the ways that I need to and I'm so much smarter this time around and I have so much less baggage and negativity that I've just let go of and cut it loose,” Tate said. “I'm at a point where I'm not ready to let anybody put limitations on what I can do.”