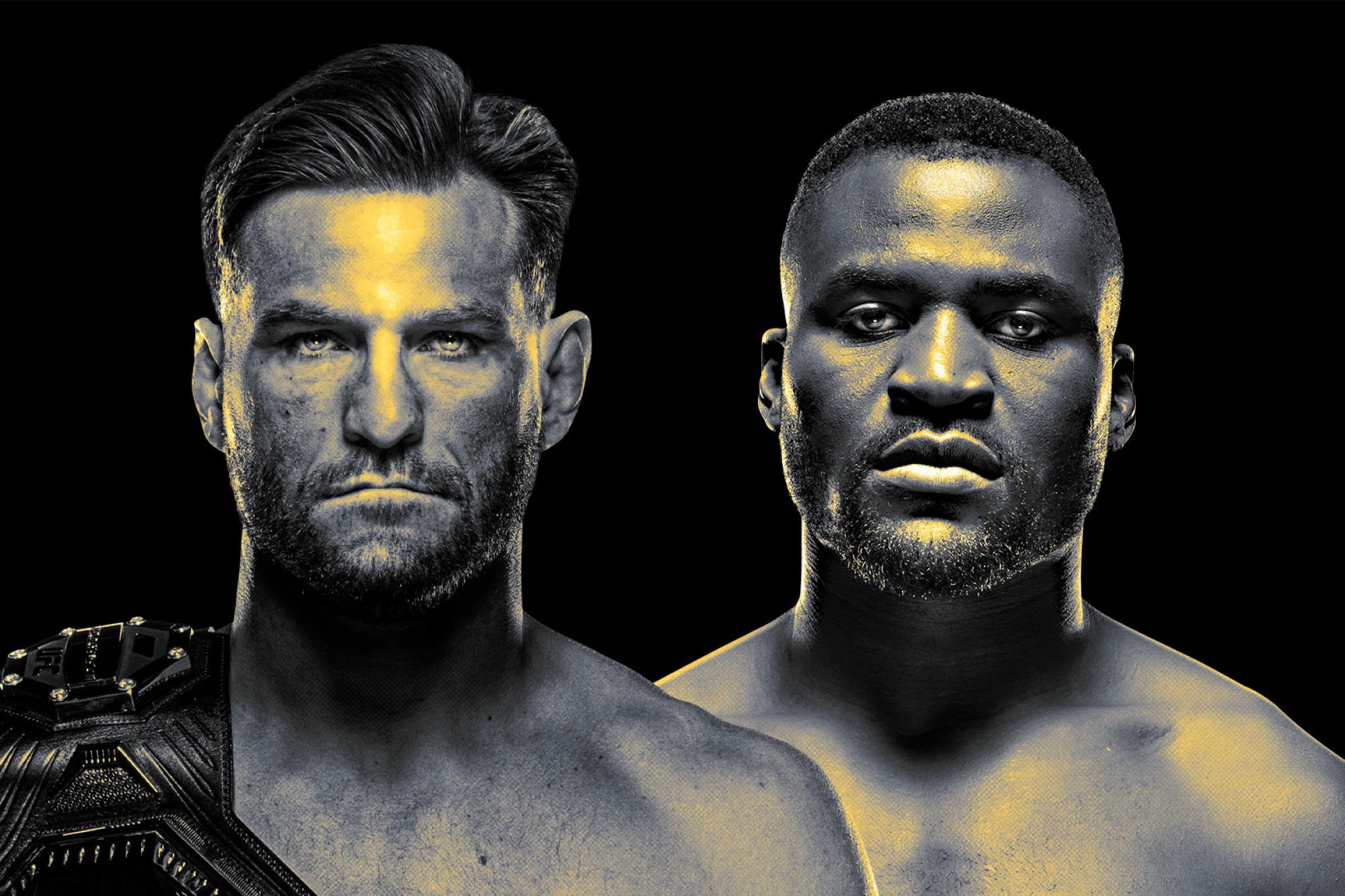 Live Results, Winner Interviews And More From UFC 260: Miocic vs Ngannou 2, Live From The UFC Apex In Las Vegas
By Thomas Gerbasi, on Twitter @tgerbasi • Mar. 27, 2021

Miocic (20-3, fighting out of Independence, Ohio) is widely recognized as the greatest heavyweight in UFC history. The record holder for most title defenses and most post-fight bonuses in the division, he cemented himself as an all-time great by defeating former light heavyweight and heavyweight champion Daniel Cormier twice during their historic trilogy. Miocic also holds the record for most heavyweight strikes landed in the Octagon with an impressive 1,525, a number he accumulated with victories over former champions Junior Dos Santos, Fabricio Werdum and Andrei Arlovski. He now looks to improve upon his 2018 win over Ngannou by becoming the first man to finish him.

Devastating finisher Ngannou (15-3, fighting out of Paris, France by way of Batie, Cameroon) intends to make the most of his second shot at UFC gold by landing another signature knockout. Among the most feared athletes to ever compete in the UFC, Ngannou boasts an imposing 100 percent finishing rate, which includes first round stoppages over former champions Cain Velasquez, Junior Dos Santos and Andrei Arlovski. He now seeks to continue his current momentum by vanquishing Miocic and becoming just the third African-born champion in UFC history.

Marc-Andre Barriault scored his first UFC victory in the middleweight opener, stopping Abu Azaitar in the third round.

Marc-Andre Barriault talks about his third-round TKO win at UFC 260: Miocic vs Ngannou 2

A competitive first round was likely won by Azaitar, who was the busier fighter both at range and in the clinch, and while the Moroccan briefly jarred Barriault with a right hand in the second minute of round two, he was rapidly fatiguing and the Canadian was surging, leading to a third round where Barriault began taking over. After an odd sequence where Azaitar bent down to pick up his mouthpiece, Barriault went on the attack, and after he moved into the mount position, he delivered a barrage of strikes that forced Azaitar to give up his back. The game Azaitar wouldn’t give in, but another blitz of strikes brought in referee Jerin Valel to stop the bout at the 4:56 mark of round three.

Official Result: Marc-Andre Barriault def. Abu Azaitar by TKO at 4:56 of Round 3

Omar Morales talks about his unanimous decision win at UFC 260: Miocic vs Ngannou 2.

After a slow yet effective first round for Morales, Young went on the attack early in the second, getting a takedown in the opening minute. Morales didn’t stay grounded long, and he began to up his work rate in order to get Young on the defensive, and a late surge certainly helped him on the scorecards. Add in a takedown in the second minute of round three, and Morales was extending his lead as the fight entered its closing stages. And though Young kept trying to close the gap, Morales’ striking left no doubt when the identical scorecards of 30-27 were read.

Michal Oleksiejczuk talks about his split decision win at UFC 260.

Oleksiejczuk was in Bukauskas’ face from the start, but the Lithuania native wasn’t backing down, leading to some solid back-and-forth action highlighted by Bukauskas rocking the Polish prospect two minutes in and Oleksiejczuk returning the favor with a little over two minutes to go.

Refusing to back up, Oleksiejczuk’s pressure remained relentless in the second stanza, and while Bukauskas got in his shots, it was the Polish fighter’s forward motion that was leaving the best impression until a later surge from “The Baltic Gladiator” that put Oleksiejczuk on the defensive.

Bukauskas kept the momentum going in the third as he outworked his foe on the feet, but a late-round body shot hurt him and forced him to backpedal to gather himself, making it another tough round to call.

Welterweight Abubakar Nurmagomedov kept the family name victorious in the Octagon as the cousin of Khabib Nurmagomedov scored his first UFC victory over Jared Gooden via unanimous decision.

After a tactical opening, Nurmagomedov stung Gooden with a 1-2 midway through the opening round and he continued to score well with a strong technical striking attack throughout the first and second frames. The Dagestan native finally implemented his grapping game in the final stanza, and he was just as dominant as he kept Gooden grounded for most of the round.

Light heavyweight power hitter Alonzo Menifield showed off his ground game against newcomer Fabio Cherant, submitting his foe in the first round.

Menifield blitzed Cherant as the bout opened, taking him down within 20 seconds, and moments later, the Texan had locked in the Von Flue choke that forced a tap out at 1:11 of round one.

With the win, Menifield moves to 10-2. Cherant, who replaced William Knight on short notice, falls to 7-2.

Alonzo Menifield talks about his submission win at UFC 260.

Jamie Mullarkey talks about his first-round knockout win at UFC 260: Miocic vs Ngannou 2.

After the two fighters got acclimated to the Octagon, Mullarkey landed
a perfect left hook on the chin of Worthy, and the Pittsburgh native
fell face-first to the deck, and after a few follow-up shots, referee
Chris Tognoni stopped the fight at :46 of the first round.

Official Result: Jamie Mullarkey def. Khama Worthy via knockout at :46
of round 1

Flyweight prospect Miranda Maverick likely earned herself a place in
the top 15 with a three-round unanimous decision win over Gillian
Robertson.

Miranda Maverick talks about her unanimous decision win at UFC 260: Miocic vs Ngannou 2

Maverick kept the heat on Robertson from the start, and after
establishing herself in the standup game, she put Robertson on the
deck with under two minutes to go. It wasn’t a long stretch on the
mat, but Maverick made her point and added a second takedown in the
latter stages of the round.

Robertson scored her own takedown in the opening minute of round two
and she went to work, nearly catching Maverick’s neck before the fight
went back to the feet, where Maverick scored well until the horn. In
the third, Maverick broke open the fight, working well on the feet and
the ground to wrap up her 11th pro win.

“The Sugar Show” is back in business, as bantamweight up and comer
Sean O'Malley rebounded from his first pro loss with an impressive
third-round knockout of Thomas Almeida.

O’Malley (13-1) fought a disciplined fight in the first round, varying
his striking attack from range. In the second half of the frame,
O’Malley landed a flush left kick to the head that stunned Almeida,
and seconds later he dropped the Brazilian with a left hand. O’Malley
began to walk away, thinking the fight was over, but it wasn’t, and
Almeida got up and made it out of the round.

Almeida (22-5) opened up the second round by focusing on O’Malley’s
legs with his kicks, and they were having an effect. In between,
though, O’Malley continued to mix up his striking attack effectively
as he kept his opponent at bay, and the third was more of the same
until a left hand put Almeida on the deck. O’Malley began to walk away
again, but this time he left no doubt, as a right hand on the grounded
Almeida brought in referee Mark Smith to halt the bout at 3:52 of
round three.

Official Result: Sean O’Malley def. Thomas Almeida via knockout at
3:52 of round 3

It was a wild one for as long as it lasted, but in the UFC 260 co-main
event, Vicente Luque emerged victorious, submitting former
welterweight champion Tyron Woodley in the first round.

Woodley raced out of his corner and after missing with a big right
hand, he bulled Luque into the fence. The two traded positions in the
clinch until separating, and Woodley was much more aggressive than he
has been in recent fights. With a little over two minutes left,
Woodley rattled Luque with a right hand, but Luque answered with a
right of his own that staggered the former champ. On wobbly legs,
Woodley fired back and tagged his foe, but once Luque got the fight to
the mat, he closed the show, sinking in the D’Arce choke that forced a
tap at 3:56 of round one.

Official Result: Vicente Luque def. Tyron Woodley via submission at
3:56 of round 1

It took a little over three years longer than many expected, but
Francis Ngannou is now the UFC heavyweight champion of the world after
a devastating second-round knockout of Stipe Miocic in a rematch that
headlined UFC 260 at the APEX in Las Vegas.

In their first bout in January 2018, Miocic shut Ngannou out over five
rounds, but in the five fights since, the Cameroon native has turned
from a dangerous knockout artist into a well-rounded mixed martial
artist. In the end, though, it was the power of “The Predator” that
forced a changing of the guard in the heavyweight division.

Francis Ngannou talks about his second-round knockout and capturing the heavyweight title at UFC 260.

Ngannou struck first with an overhand right in the second minute, but
Miocic was unbothered by it, and moments later, the champ shot for a
takedown. Ngannou defended the takedown and landed some ground
strikes, following up with a head kick when the two rose and
separated. Miocic’s offense consisted mainly of leg kicks, making it
an Ngannou round.

Early in round two, a left hand dropped Miocic, and while the
Cleveland native rose and swung back, landing a hard right, as he
rushed in to follow up, a short left put him back on the deck, with a
follow-up strike bringing in referee Herb Dean to stop the fight at
:52 of round two.

Official Result: Francis Ngannou def. Stipe Miocic via knockout at :52
of round 2