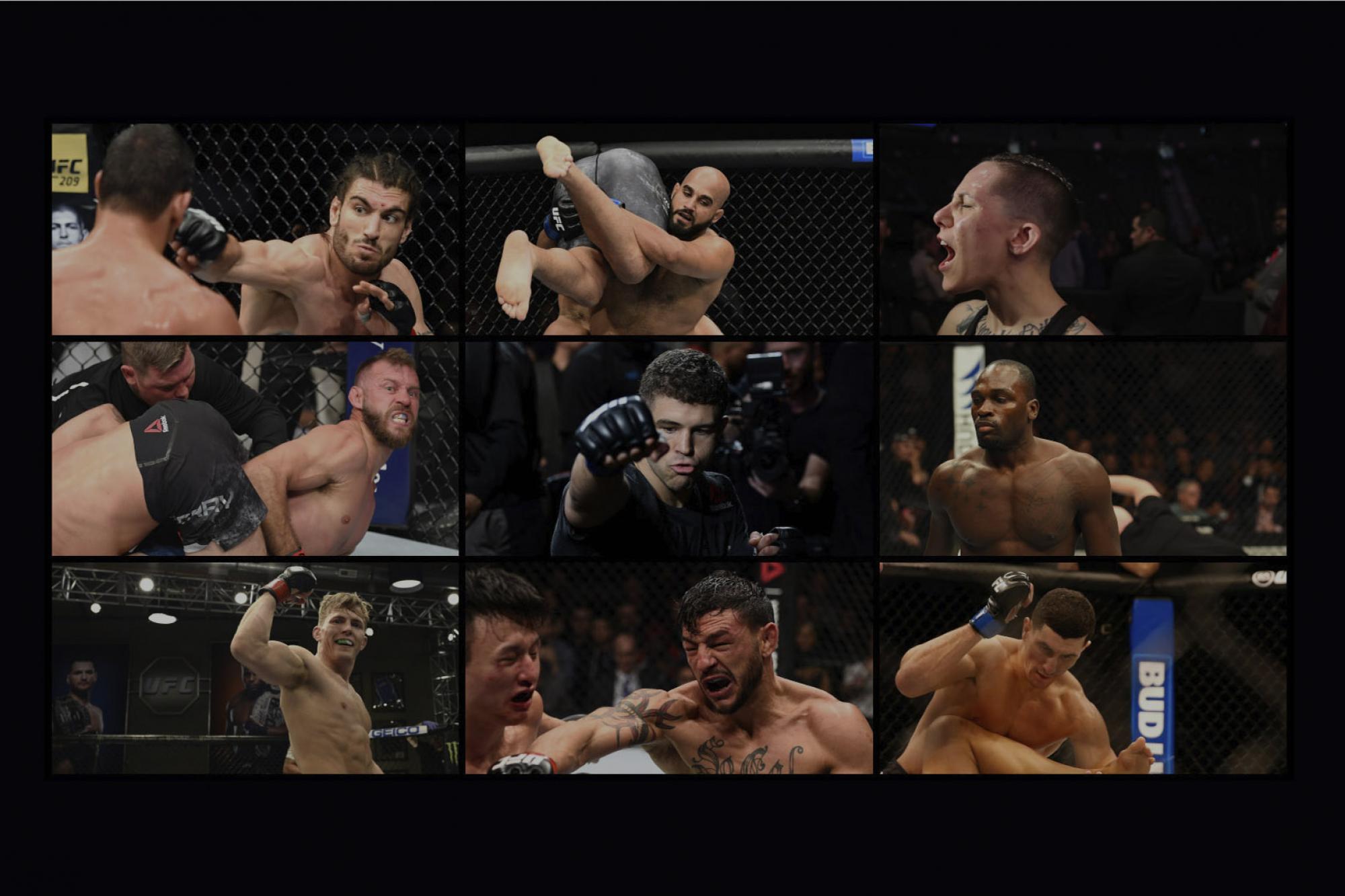 The main event in the UFC’s return to Ottawa will be a pivotal matchup in the lightweight division as Al Iaquinta looks to build on his last win over Kevin Lee when he faces former title challenger Donald “Cowboy” Cerrone. This will be the second fight in a row for Cerrone at lightweight after he returned to his old stomping grounds and made an immediate impact with a TKO against top notch 155-pound prospect Alexander Hernandez. Cerrone will take a step up in competition this time going against Iaquinta, who is 6-1 in his past seven fights, with his only loss coming in a lightweight title fight against Khabib Nurmagomedov that he accepted on 24 hours’ notice. Outside of that lone blemish on his resume, Iaquinta has looked better than ever while also finishing four of his past six wins by knockout. Only one of these lightweights will be able to climb closer to title contention with a win on Saturday night, so expect Iaquinta and Cerrone to leave everything inside the Octagon in what should be an instant classic.

Veteran middleweight contender Derek Brunson has knocked on the door of a top five ranking in the past, but unfortunately he’s fallen short in some of his biggest opportunities to jump ahead in a very tough division. Brunson has suffered back to back knockout losses to current interim champion Israel Adesanya and Ronaldo “Jacare” Souza, so there’s little doubt he wants to get back in the win column this weekend. Former Ultimate Fighter winner Elias Theodorou will do everything in his power to stop Brunson as he looks to build on a three-fight win streak while attempting to find his own spot in the top 10 rankings at 185 pounds. Theodorou knows the path to the best middleweights in the world goes through Brunson, but he’s nobody’s gatekeeper, which is why this promises to be an all-action affair between two elite middleweights.

Following three losses in a row, Cub Swanson knows he’s in a do-or-die situation going into his next fight against upstart featherweight contender Shane Burgos. Now Swanson has only fallen to elite fighters at 145 pounds, including former title challengers Brian Ortega and Frankie Edgar. Still, Swanson doesn’t want to look at his record and have four consecutive losses staring back at him, no matter the circumstances. As for Burgos, the 28-year old featherweight has gone 4-1 thus far in his UFC career and he’s coming off a win over Kurt Holobaugh by submission in his last outing. Burgos has shown real potential when it comes to his skills inside the Octagon, but this will be his toughest test to date. Swanson may have suffered a few losses recently, but he remains one of the best featherweights in the sport and he’ll look to prove that against Burgos on the main card this Saturday night from Ottawa.

Former Ultimate Fighter winner Brad Katona has looked like a serious prospect since making his way to the UFC through the reality show. With an undefeated record, including a pair of unanimous decision wins in the UFC, Katona has continued to show growth with every performance as he looks to forge his way ahead in the treacherous bantamweight division. For his next test, Katona will go up against Merab Dvalishvili, who comes into the fight off his first win in the UFC over Terrion Ware this past September. Dvalishvili has faced nothing but solid competition since first arriving in the UFC and this fight will be no different. As Katona attempts to cement his place as one of the best prospects in the division, Dvalishvili will try to take his place when they clash at 135 pounds.

Former basketball player turned UFC heavyweight Walt Harris comes into this fight unbeaten in his last two bouts. At his best, Harris is a heavy-handed, yet athletic, fighter for his size and he’s pulled off some spectacular knockouts during many of his performances in the UFC. This weekend, Harris draws undefeated newcomer Serghei Spivac, who makes his UFC debut with a perfect 9-0 record and a slew of finishes decorating his resume. Spivac is a very well-rounded fighter with a mixed bag of knockouts and submissions on his record, but he’s definitely jumping right into the lion’s den against somebody like Harris in his debut.

One-time sparring partners turned opponents, Andrew Sanchez looks to give Marc-Andre Barriault a rude welcome in his first fight in the UFC. A former Ultimate Fighter winner, Sanchez has shown flashes of brilliance at moments during his UFC career, but mistakes cost him two losses in a row before he bounced back with a unanimous decision win in his last fight. To make it two in a row, Sanchez will have to hand Barriault a loss in his first appearance in the UFC after amassing an 11-1 record, including eight straight wins, with three of those ending by way of knockout.

Canada’s own Sarah Moras will attempt to stave off a third straight defeat when she faces recent Ultimate Fighter winner Macy Chiasson. At times, Moras has looked like a potential top 10 bantamweight after nailing a submission win over Ashlee Evans-Smith in 2017. Unfortunately, Moras has struggled with consistency and now she’s dropped her last two fights in a row. She will get no reprieve with her upcoming fight with Chiasson, who is just 5-0 in her career, but two of those wins have come in the UFC with a submission finish and a knockout in her last performance. Chiasson appears to be the real deal, but she faces a true UFC veteran in Moras, who would love nothing more than to hand the Louisiana native the first loss of her professional career.

Following a year and a half long layoff, Canada’s own Aiemann Zahabi will make his return to action this weekend against Vince Morales. Zahabi had quite a few eyeballs on him after making an impressive debut back in 2017 but he then suffered a stunning loss to Ricardo Ramos by spinning back elbow that stopped his momentum like he just hit a brick wall. Now Zahabi will attempt to bounce back from that loss while going up against Morales, who is still seeking his first UFC win. Morales came up short in his debut last November but he would love nothing more than to go into Zahabi’s home country and earn his first victory inside the Octagon.

Canadian featherweight Kyle Nelson and his opponent Matt Sayles are both searching for their first UFC win when they clash on Saturday night. Sayles made his way to the UFC with a ground-and-pound TKO on Dana White’s Tuesday Night Contender Series but then came up short in his debut against Sheymon Moraes last August. As for Nelson, he had his six-fight win streak snapped in his Octagon debut against Diego Ferreira. Neither Nelson or Sayles want to start a UFC career off two straight losses, so this is definitely a huge fight for both athletes coming into this weekend.

Former Olympic wrestler Arjan Singh Bhullar picked up his second UFC win in his last fight, but now he goes up against one of the fastest rising prospects in the heavyweight division. Juan Adams came storming into the UFC off Dana White’s Tuesday Night Contender Series and then picked up a knockout win in his debut. Adams is a hulking heavyweight who routinely walks around at well over 290 pounds. To remain undefeated, Adams will have to show off that size and power while going up against a suffocating grappler like Bhullar, who will undoubtedly look to even up the size differential by showcasing his world-class wrestling skills.

It’s been more than two years since Mitch Gagnon last appeared in the UFC and he comes into his return fight off two straight losses. It wasn’t that long ago when Gagnon had rattled off four straight wins in the UFC and he would love to get back to that form while facing off against newcomer Cole Smith. The Canadian rookie comes into the fight with a perfect 6-0 record and he has finished five of his six opponents. Now he moves up to the big leagues, where Smith attempts to get his first victory in the UFC while Gagnon wants to return to his own winning ways as he steps back into the Octagon for the first time since 2016.